Ms．Masako Shindo (56)
A soprano that sings national anthems of more than 70 foreign countries.

The national anthems vary according to the countries of the world in points of length, melody and word language. The national anthem of Germany was composed by Haydn．The Japanese one, Kimigayo, is comparatively short. Some of theｍ are long, lasting a few minutes, either sorrowful or brave.

She can sing more than 70 of them in the original words and in pronunciations as well as the original people do.

Nine years age, she sung in front of the Taiwan ambassador to Japan at the party held by one of her acquaintances, and this singing of hers triggered many other countries to invite her for the singing, for instance, to the ceremony of the commemoration of the founding of the nation. She has had
her pronunciation checked in advance. Actually she was instructed by the
ambassador Lesotho to Africa for about 40 minutes in the pronunciation of
セソト.語

She says“Every body is very much pleased with my singing in the original
language, and beautiful sounds allow soul to inhabit in them. By singing the
Japanese anthem and the original one of the country will sure make it possible to exchange the warmth of their hearts.”

She was born in Tokyo, her father so interested in folk songs that music was
close to her. When she was in the 6th year in primary school, she enjoyed
listening to the number Mao of Schubert in a class, she was fascinated with it though she couldn’t understand the words at all. She entered the faculty of music, Tomei Gakuen Universlty, wishing to be as great a musician as he that has left a great name behind him for 200 years.

Now, while she teaches singing in her music room, she sings on the stages of opera and concerts

She has some suggestions about the Olympic games, Tokyo. How about making a use of Japanese primary school ? Each primary school takes care of a visiting country and the Japanese pupils sing the national anthem of the country to welcome them to their lodging facility.. This will be a good study of their history, society and music, and will also be the best treatment to the visitors. Needless to say, she will be willing to teach them.

（英訳）
In my performances through every place across the country, I have met a number of people that impressed me a lot, and recently I have experienced
international relations through national anthems of various countries of the
world..

The internet programs of TV that my former instructor produced triggered
such international relationships, intended to invite as the guests the foreign
ambassadors to Japan and to have them talk free about fresh information of their countries. Then I was asked by the instructor to sing, on the top of the
program, the national anthems of the guests as well as the anthem of Japan, Kimiga-yo. This is how I was named as a“national anthem diplomat,”and
it was in 2008 when this program was started with rather difficulties a the
beginning.

What surprised me a lot was the fact that it was only in the world of the western music that the music paper existed I so far leaned. There was hardly music paper of the national anthems of most of the countries say
Africa and in the Middle East and it seems that the songs were spread from mouth to mouth. I myself have practiced them by recorded tapes or else
asked the relevant embassy staff to listen to me sing for confirmation. After
all these efforts, I could sing them well and they really enjoyed it. As prompted by the TV program, I had more chances of meeting the government
officials overseas in their receptions and attending various events held under
the sponsorship of foreign embassies in Japan It was my pleasure and I have never forgotten that when I sung in front of Israelite their national anthem, they were so moved with many thanks that they even wept at it,
expressing their appreciation saying it was such a beautiful and impressive way of singing.

Kimiga-yo, the Japanese national anthem, is a mild and peaceful song, but there are violent songs too in the world, some against background of struggles for territory and others showing the word“red”that implies blood.
and thus the histories of the country I can find through the words of their national anthems. Furthermore, when I was invited to attend the new year
festival of Sri Lanka (Democratic Socialist Republic of Sri Lanka) I came to know their custom that they do every new year to boil milk in wishing happiness for the year. Without these activities of mine, I would have never
known such customs as well as traditions and civilizations of different countries.

In my concert, I have had chances to introduce the world’s folk songs, and
the year before the last, I sung a folk song that I learned from the ambassador and his wife of Albania (Republic of Albania) , good friends of mine, when the ambassador of Syria (Syrian Arab Republic) in the hall asked me to sing a Syrian song in envy of it. They were all sweet and open-hearted. While I have been introducing foreign songs, I have been
serving as an instructor to teach at my local schools Japanese songs and sing them together with children, in an attempt to bring them up to introduce
overseas the wonderful Japanese songs.

I feel much pressure of singing the national anthem as it represents the whole nation, but I take it not in the relationship of nation to nation but people to people. Each song that I sing is full of pleasure, full of tears and inward healing and peace．Having as many people as possible feel and realize the power of music that is common to them all across the world, is really my earnest desire.. 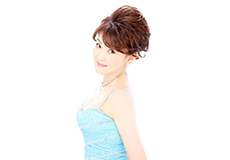